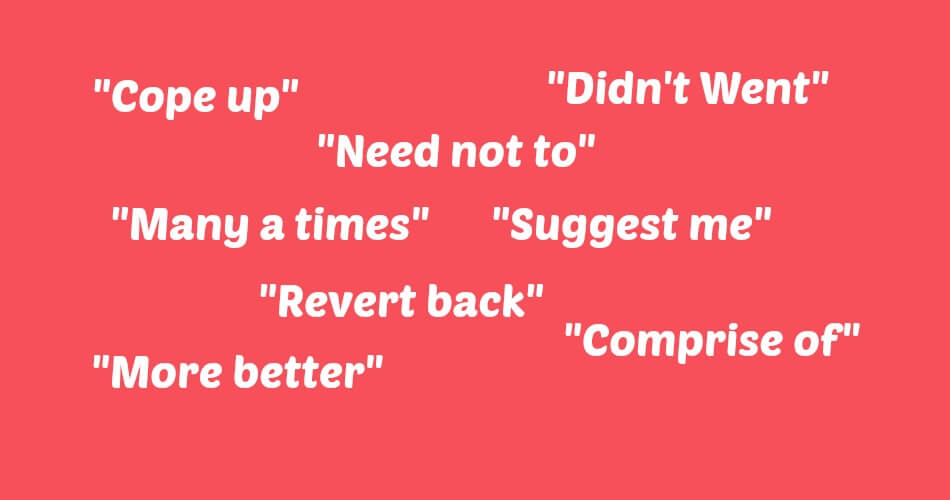 There are many common English errors that are quite unique to Indians, blame it on their flawed learning process. Since English is a second language in India, many tend to maintain a casual approach towards using grammar and vocabulary in their everyday writing and speech. Moreover, many people learn English usages from their peers without actually verifying the accuracy, a behavior that leads to easy acceptance of quite a few wrong usages in their everyday speech and writing. As a result, you hear usages that are unacceptable in standard English.

Here’s a list of such common English errors for your reference.

Cope Up vs. Cope With

Using prepositions with verbs loosely is one of the common mistakes Indians make.

How do you cope up?

I was stuck up in the traffic.

This tendency to use “up” indiscriminately with common verbs may have been influenced by common phrasal verbs such as break up, take up, wrap up.

Incorrect: You should learn how to cope up.

Correct: You should learn how to cope.

The verb ‘cope’ usually collocates with the ‘with’ preposition.

For example, you should say, “He should learn how to cope with the pressure.”

Here’s a discussion on Quora if want to learn more.

“Many a Time” is a fixed expression which is considered archaic these days. However, it is used by authors and publisher in literature.

“Many a Time” essentially means “Many Times”.

Speaking of rules of this archaic usage, any noun in front of “Many a” will take a singular form. Also, it’s usually used at the beginning of the sentence.

For example, “Many a soldier have fought the war.”

Apart from being the main verb, need can also be a modal verb or auxiliary verb. When used a modal verb, it doesn’t take any preposition.

Modal verbs are used to indicate certainty, possibility or probability of an event.

Apart from need, there are many other common modal verbs you must be familiar with, such as can, could, may, might, will, would, shall, should, ought to, dare.

There’s something common in all of the examples shown above – none of the modal verbs have taken any preposition.

Similarly, when used as a modal verb, “need” never takes a preposition.

Incorrect: You need not to say this.

Correct: You need not say this or you don’t need to say this.

Follow this link if you want to learn more about modal verbs.

Because of the rampant use of the word “anyways”, many tend to believe this is just another alternative of “anyway” (adverb).

However, this is a wrong assumption.

Anyways is a non-standard colloquial variation of the word “anyway” which carries the following meanings.

FYI, anyways is universally regarded as being incorrect and unfit for print or publication. Therefore, you shouldn’t use it in formal writing or speech.

NB: You may have also come across the use of “Any Way” which is essentially a combination of two words – Any and Way.

For example: Will you be able help her in any way possible?

Here the word “any” (adjective) defines “way”. It’s not a variation of the word “Anyway”.

There’s a very useful article on this topic if you want to learn more about the difference.

Isn’t It? A Universal Question Tag

Question tags are some of the most confusing parts of learning English for many Indians.

Pro Tip: Questions tags are tag questions which are added to the end of declarative statements. For example, “You’re John, aren’t you?”

Question Tags follow a specific grammar pattern. They usually depend on the verb or auxiliary verb in a sentence.

Note: Question tags can be different based on nature of the questions asked and intention behind the questions. Here’s a good source to learn more about rules of question tags.

However, many Indians tend to use “isn’t it?” no matter what the questions are.

Incorrect: He really likes you, isn’t it?

Correct: He really likes you, doesn’t he?

Incorrect: You’ve paid the rent for July, isn’t it?

Correct: You’ve paid the rent for July, haven’t you?

Incorrect: Rand is quite upset with his friend, isn’t it?

Correct: Rand is quite upset with his friend, isn’t he?

Revert Back vs Revert

This is something I’ve written about a few times in the past as well.

The problem lies in using “revert” in places where it doesn’t belong and then making it worse by adding “back” to it.

Going by its definition in dictionaries, “Revert” essentially means restoring something/someone to its previous/original state.

For example: After leaving the rehab, he reverted to his old drinking habits.

Moreover, “Revert” is an intransitive verb, meaning it doesn’t require a direct object to complete its meaning.

Correct: The magician said, “The rabbit will vanish in two seconds.”

In the same way, things or people revert to their old/original state or habits.

Since “Revert” means “Going Back” to a previous state/condition, you don’t need to add “back” while using the world “Revert”.

NB: While writing emails, many people tend to use “revert” or “revert back” when they mean to say “reply”. Many linguists believe this is wrong even as some online dictionaries have accepted this as an entry in email context.

CollinsDictionary.com has the following entry for Revert:

Revert: (US) (to reply to someone): We will revert to you with pricing and other details.

Recommend Reading: 6 Common English Vocabulary Errors and How to Avoid Them

9 thoughts on “A List of Common English Mistakes Indians Make”