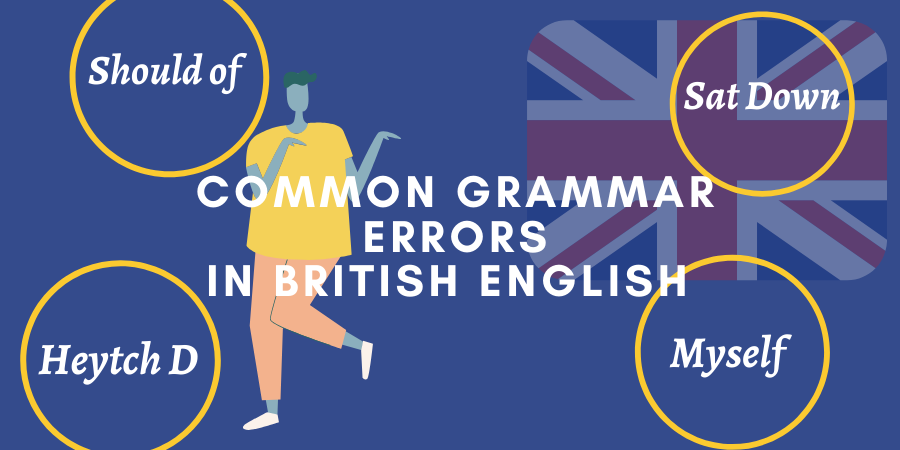 These are the grammar mistakes and phrases that drive British people crazy.

Even as the English language is evolving and modern usages are making their way to universal acceptance, there are many usages that are still not correct by conventional rules.

In this guide, let’s take a look at the common English errors found mostly in the United Kingdom. There are many grammar mistakes and phrases that drive British people crazy. Well, not literally.

Many people are in the habit of saying “of” after should/could incorrectly. It’s mostly true for people who have developed a habit of speaking by listening to others.

Can I get instead of Please, may/can I have

It’s interesting how phrases can have a varying degree of politeness in speech. While British people tend to use “Please” more often than not, North Americans are often more direct.

For example:
Please, may I get / can I get a coffee! (British)
Can I have / Can I grab a coffee! (American)

If you want to sound polite while asking for permission, you might want to use words such as “Please”, “May” or “Have”.

As an Indian, I have seen many people (especially IT professionals) mispronouncing the letter “H” as “Heytch”. As a result, they would pronounce words like “HD” as “Heytch Dee”, “HR” as “Heytch Aar”.

If you’re wondering where they picked it up, it’s probably their workplace where they worked with some British coworkers.

In the United Kingdom, many speakers tend to mispronounce the letter “H” (eytch) as “Heytch” which often gives their Indian friends the impression that it’s the right pronunciation.

Using “Like” as an emphasis is a common scenario among the British people, especially in everyday speech.

Not only the British, but many Indians also tend to commit this error while speaking.

Was Sitting down / Sat down

It’s also common for many British people to say “I was sat down” when all they mean is “I was sitting down”.

Reflexive pronouns are some of the most misunderstood rules in English. Like many people around the world, British people also tend to make mistakes. Among all reflexing pronouns, “Myself” is the most commonly misused.

Using adjectives instead of adverbs

There’s a good deal of confusion when it comes to the difference between good and well. Good is an adjective while Well is an adverb. However, quite a few people (including British) tend to interchange them, especially in their everyday conversation.

For example:
He did good. (He did something positive)
He did well. (He did it nicely)

Note: When you say, “He did good”, you actually mean he did some good deed. On the contrary, “He did well” means he did something well, meaning his performance in something.

Question:
How are you doing today?

Note: When you say, “I’m doing good”, it actually means you’re doing some good deed, e.g. giving loads to charity, your lunch to a homeless person.